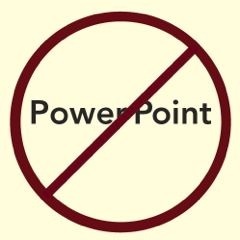 Matthias Poehm, President of the Anti-PowerPoint Party of Switzerland is blaming PowerPoint presentations for a negative economic impact in 193 countries worldwide. Poehm calculates that 85% of employees and students who view presentations with PowerPoint believe the slides are “killing motivation.” He notes the cost to the Swiss economy is 2.1 billion Swiss Francs (~$2.5B US) a year! A public speaking trainer by trade, Poehm believes that if his party becomes the fourth largest in Switzerland, he will gain enough press coverage to bring attention to his “international movement.” One of his stated goals is to launch a national referendum in Switzerland to create a law banning PowerPoint during presentations. However, he goes on to say, “The only aim of the referendum is to lift the PowerPoint issue both to the awareness of the Swiss people and to the awareness of the world population. We don’t want to prohibit anything to anybody – through this virtual claim we only want people to have a look at the existing solutions.”

Poehm proposes creating flip charts during the presentation is the solution to this corporate production killer, suggesting that it is more exciting and engaging for an audience to watch the speaker illustrate points with pen and paper than to read pre-prepared slides. I would like to respectfully submit to the movement that the presenters I work with first have to get anxiety under control to improve their presentations. Coupling speaking with drawing would even further increase the adrenaline flow and make presenters even more nervous.

While I do personally really enjoy the interaction that happens when a presenter uses a flip chart or white board to bring an idea to life, it may not be for everyone. Poehm’s site highlights a Horror Slide of The Month, and I agree the examples are indeed a very poor use of PowerPoint and ultimately could have helped contribute to a poor presentation. But if the presenter tried to do the same thing on a flip chart, the audience could have an even worse experience.

Could the solution be better training for presenters about how to connect with listeners? Keep in mind: audiences retain a greater amount of information when visuals are added and even more when the presenter introduces a kinetic experience (where listeners participate in the presentation). If the presenter does not connect with the audience, it doesn’t really matter the type of visual — it would be useless.

You do have to know your audience. Some listeners won’t have a positive reaction to a deck of slides. I have had the opportunity to sit at the boardroom table with many highly successfully entrepreneurs who never wanted anyone to show up with a pre-prepared deck. They wanted evidence of a little research, incorporating stats and facts, just to start the conversations; that audience wanted to co-develop the idea. While this situation would not be a place to have ideas fully shaped in a slide deck before beginning the presentation, it is important to have a clear and concise narrative, which I suggest would improve many presentations.

I do agree that PowerPoint is used poorly and way too often in business and tends to be a crutch for presenters. I’d suggest improving this situation requires presenters to take a personal assessment of themselves to determine what needs improvement in addition to deciding when to use and when not to use PowerPoint.

Keep up-to-date with Fast Track Tools by subscribing to our blog, via Twitter @fasttracktools and join our Facebook community! Connecting will ensure you don’t miss special subscriber or “friend” only offers down the road.

One thought on “Should we abandon PowerPoint?”