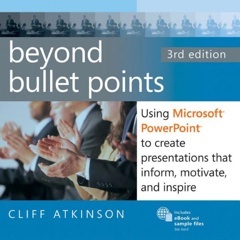 A little round dot followed by sentence fragments, again and again. It’s the format of so many PowerPoint presentations. The bulleted text has become our crutch in corporate communications. Then, even worse, what if the presenter reads each and every word to the audience?

We have all seen it done. Forget boring, bullet-point-riddled slides forever! Communications expert Cliff Atkinson has a three-step methodology for increasing the impact of your presentation. Discover how to combine classic storytelling techniques with the power of visual media to create a rich, engaging experience with your audience.

Atkinson’s book Beyond Bullet Points: Using Microsoft PowerPoint to Create Presentations That Inform, Motivate and Inspire shows how to use Hollywood’s script-writing techniques to focus your ideas, how to use storyboards to establish clarity and how to properly produce the script so that it best engages the audience.

Atkinson tells the story of a presentation that made a $250 million difference in chapter one. Attorney Mark Lanier pled the case against Merck in the first Vioxx-related death trial, brought by the widow of a man who died of a heart attack that she believed was caused by the painkiller. Before preparing his presentation, he read Beyond Bullet Points, and invited Atkinson to Houston to lend a hand in putting his presentation together.

They used the three-step process from the book; Lanier masterfully framed his argument with an even flow of projected images and blended it with personal stories, physical props, a flip chart, a tablet PC, a document projector and a deeply personal connection with his audience.

Lanier’s technique was persuasive and aimed to get the jurors to believe in his “simple, alluring and emotionally cathartic stories, versus Merck’s appeals to colorless, heavy-going, soporific reason. Lanier (invited) the jurors to join him on a bracing mission to catch a wrongdoer and bring him to justice.” The Texas jury awarded the widow $253.4 million.

You may be thinking, “I don’t have time to do something that elaborate.” Put that in perspective: If you spend months on a complex project, isn’t it worth a few days to wrap up the results into an effective presentation?