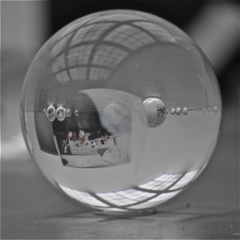 In Part I, I suggested how to frame a question so you know how to begin to find an answer. Hopefully, you took some time to think about, and outline, the underlying issues. What is causing the problem? What are the potential answers to the problem? Once you have a hypothesis, you can focus on a solution.Since we’re on a roll with Wikipedia, let’s go there for a definition of “hypothesis:”

A hypothesis (from Greek ὑπόθεσις; plural hypotheses) is a proposed explanation for an observable phenomenon. The term derives from the Greek, ὑποτιθέναι – hypotithenai meaning “to put under” or “to suppose.” For a hypothesis to be put forward as a scientific hypothesis, the scientific method requires that one can test it. Scientists generally base scientific hypotheses on previous observations that cannot be satisfactorily explained with the available scientific theories.

So, a hypothesis is a tentative conclusion. You must continue to build on it – based on “observable phenomenon.”

Do you keep your eyes open? Really – do you consider yourself a keen observer? Would you make a good eyewitness? We’ve all heard that studies show:

“…Numerous psychological studies have shown that human beings are not very good at identifying people they saw only once for a relatively short period of time. The studies reveal error rates of as high as fifty percent — a frightening statistic given that many convictions may be based largely or solely on such testimony.

These studies show further that the ability to identify a stranger is diminished by stress (and what crime situation is not intensely stressful?), that cross-racial identifications are especially unreliable, and that contrary to what one might think, those witnesses who claim to be “certain” of their identifications are no better at it than everyone else, just more confident.”

Do you have strong powers of observation? Take this test. Meet you here next time!

After completing the Communicate to Win workshop, you will have the most compelling argument and the best ideas. With this complete package, you will gain the tools necessary to guarantee that you have the best ideas and that you can present them confidently so you will WIN. Read what participants say.

2 thoughts on “Problem solving and your career, part II”